How to Spot a Fake New York ID 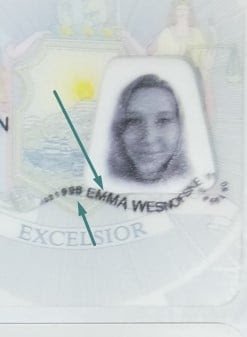 It is a unique feature that comes with New York driver’s license. The first & last name of the license holder & date of birth are shaped around the duplicate photo. They are circled beneath the portrait in a way that counterfeit id may lack. The New York ID cards are not made of cheap laminate, and they have specific security features. Compare the characteristics of an authentic ID to the ID the person is giving to you.

On the front of every New York ID, there’s a hologram. Scratch it to make sure it isn’t flaking off before you use it. Verify that the information on the license is spelled correctly. You should check the background and borders of the ID for fuzziness. You should also give a quick look at the expiration date; if it’s passed, it’s no longer valid.

The DMV uses a raised-printing technique to print the driving license number of each id. The bold driver’s license number can be felt with the tip of your fingers. If it lacks this feature then the NY id is an obvious fake.

Ask the person who gave you the ID a few questions in a friendly manner because sometimes people borrow or forge the IDs rather than just getting a Polycarbonate fake ids one. If you are friendly, the person is more likely to make an error. Ask them about their zodiac sign by looking at the date of their birth on her ID card.

A copy of the original photo provided by the license holder is also printed on the back. The only difference is that the photo is inverted horizontally. A fake id will lack this feature.

Find out where they live by asking for their address and comparing it to the ID. If the ID has a middle initial, ask what it means if there’s someone else with them, as them about their name. It’s usually the underage kids trying to buy alcohol.

If the edges of the driver’s licenses are square or rugged. These should ideally be rounded. A fake NY driver’s license that wasn’t created very meticulously or without attention to detail will often have this flaw.

You may notice the New York license is peeling off at one corner then it’s most likely a fake. Real New York ids don’t easily peel off. It can be a good tell, though this doesn’t necessarily mean that the license is fake. You should investigate further and check for other problems. There are some other easy ways to investigate a fake New York id:

Air pockets and bumps on laminated driver’s licenses mean they have been created without the original equipment. It can also be a reason for you to investigate further.

The department of motor vehicles (DMV) investigators of New York have found the easiest way to figure out if an ID is fake or not. It’s an app called Intellicheck that they have on their phones. It can instantly check and tell if the ID is fake, which will help the DMV catch the crime on the spot.

Not everyone can download this app as it requires special authorization from the company. All you have to do is scan the back of the card. The app scans the barcode and compares it to multiple databases. If the app shows a red reading, that means it’s fake. If it shows a green one that represents the ID is good to go. The app caught about 50 fake IDs in New York in a week.

Needless to say, IDNYC does not work as a valid form of verification outside of New York. The power of the ID outside of New York is completely based on the discretion of the authority in question. They can choose to dismiss it completely. On the other hand, the ID can also be dismissed for certain things even within New York, or an additional ID might be required to support it, such as for travel, entering a military base, buying alcohol, and so on.